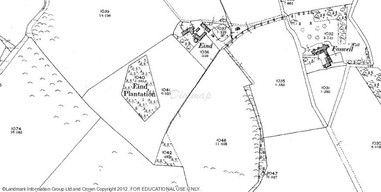 One of our study sites - this woodland was planted between 1860 and 1900
Well-designed natural experiments have the potential to overcome some of the challenges of landscape-scale studies and provide much-needed evidence to inform current and future conservation action required to meet international commitments to halting declines in biodiversity. Rather than carrying out direct experimental manipulation of a site or landscape, natural experiments overlay an experimental design on an ecosystem where change or active manipulation has occurred or is planned, beyond the control of the researcher. As such, they fall between true manipulative experiments and the more common, but less rigorous, correlative or observational studies. They usually occur at larger scales than true experiments, often increasing the chances of obtaining results with direct application to conservation management. In addition, natural experiments can also overcome pragmatic issues of land tenure/control, funding, and urgency for evidence, while still, if well-designed, maintaining a degree of experimental control and producing robust evidence.​

In the WrEN project, we have followed the natural experiment approach by careful study design and site selection. The long history of woodland creation within the UK since about the turn of the 20th Century has inadvertently created a series of historical test landscapes containing patches of woodland of varying sizes, shapes and spatial configurations. Importantly, many new woodlands were established at a known date on former agricultural land (see right).  As such they act as a blank canvas, with no woodland species existing within these sites before the date of woodland establishment. Therefore, the presence of species within these new woodlands represents successful colonization, presumably mediated by attributes of the woodland sites and the landscapes around them.

​​Accurate maps of major features in UK landscapes are available over a series of time intervals from 1840s, enabling many of these changes in woodland cover to be potentially identified and dated. Whilst it may be many years or decades before the impacts of current landscape-scale conservation projects on biodiversity are known, the underlying idea behind WrEN is to "go back in time" to assess the impact of historic land use change on current biodiversity, using woodland as an example habitat. In this way we can improve our understanding of the relative importance of the different elements of ecological networks, and develop practical guidelines for planning and implementation of future conservation work. 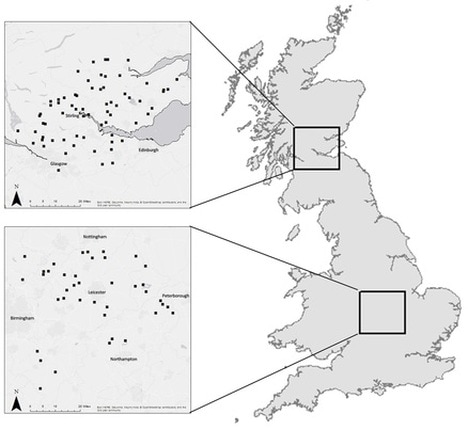 Secondary woodland study sites in Scotland and England
Two study landscapes were selected for the study, one in Scotland (~7335 km2) and the other in England (~8570 km2 (see right). Both areas are dominated (>70%) by agricultural land and represent typical lowland land-scapes in the UK.

To enable the establishment of a robust natural experiment, we used a systematic process to select suitable woodland sites within the two study landscapes. This process was informed by a comprehensive literature review, conducted as the first step of the project (see Humphrey et al. 2015). The review identified the variables that can influence biodiversity within fragmented forest landscapes and reviewed the existing evidence base. We used four of these variables (ecological continuity/woodland age, woodland size, amount of surrounding habitat, and degree of spatial isolation) as the basis of our site selection.

This resulted in 106 sites, ranging from 0.5 to 30 ha in size, 10 to 160 years old, surrounded by 0.4 to 17 % broadleaved woodland within a 3 km buffer and 10 to 1570 m from the nearest broadleaved woodland. To date we have focused on woodlands in arable and mixed agricultural land, to control as far as possible for environmental variables such as soil and climate. For more information on how WrEN was set up read Watts et al. 2016.

Putting diversity into context: how do our sites compare with ancient woodlands?

Work in 2016 and 2017 has extended the WrEN project by incorporating data on diversity and abundance of key taxa in ancient woodlands (defined as continually wooded since 1750 in Scotland and 1600 in England), and examining differences between secondary and ancient woodlands. We will use these ancient woodlands as reference sites to identify the potential biodiversity pool which could feed into the WrEN sites. We are also quantifying differences in woodland structure which can be critical in determining the suitability of woodlands for wildlife species. ​